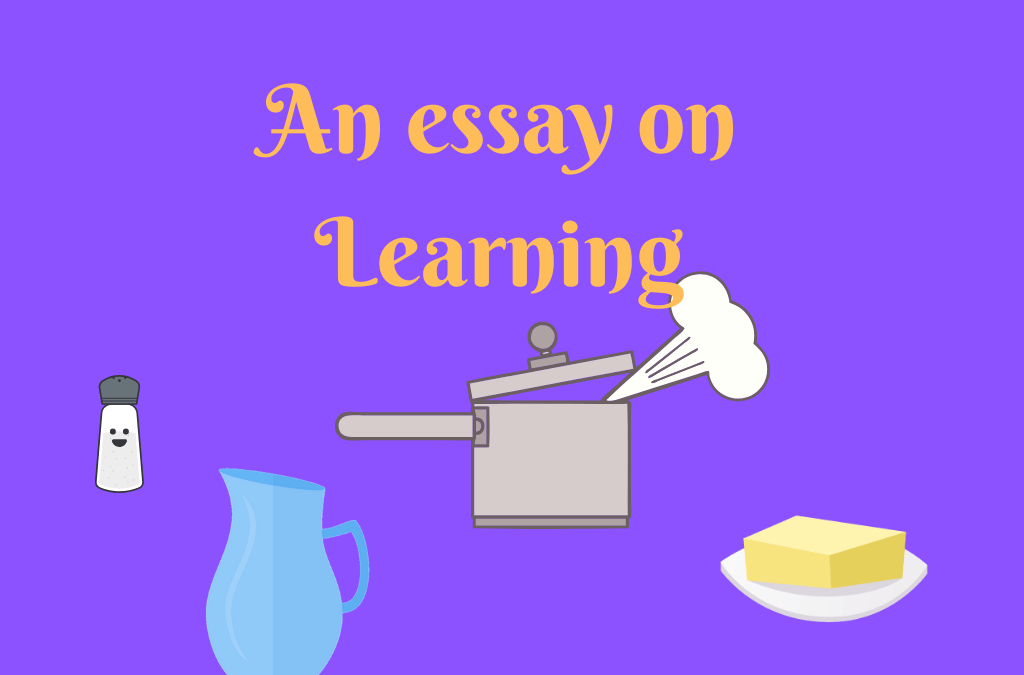 Back in high school, my dad used to cook for me a simple dish called “hrisca”. There was nothing to it, it only required a few steps. It was almost robotic. But he always did it perfectly. I could never get enough of it. There were weeks when I was asking my dad to cook the same “hrisca” over and over again. At one point, I wanted to learn how to make it too. But I would never get it quite right. It was either too salty, too dry, too soggy… you get the idea. I asked him: “dad, how is it that you always make the perfect “hrisca”? What’s the secret? Every time I try to make it, it always falls short of yours” He laughed. Then he said:

“Well, you have to start somewhere. Mine was probably worse than yours in the beginning. But I bear in mind how much salt I sprinkle in. I remember how many cups of water I use. How much butter I toss in. Then, I either do less or more of one of them. Next time, it’s either better or worse. Then I tinker with the ingredients and proportions again. I recall how it tastes and what I did to make it taste that way. In the end, you find the sweet spot. There is no secret. You just have to try. “

My “hrisca” continued to be bad because I settled for that. I got used to my recipe and I wasn’t adventurous enough with it to make it in a different way. I was too afraid to make things worse. Too afraid to learn. This leads me to this post’s main topic: LEARNING. There are two main ways of learning — from the outside world or from your own experiences.

You can always study people. They are an entire UNIVERSE of experiences and thoughts. They have their own way of viewing the world and their own models of problem-solving. I pay attention to what they do, how they do it, and then implement it into my own life. Cue an example: At a Moldovan wedding, I met a guy that came all the way from London to attend. He spoke the language, but everyone else invited had a different accent from him and used regionalisms that he didn’t have a clue about. On top of that he only really knew the groom. That’s the worst person that you can “know” at a wedding because the groom has to take care of everything else, and doesn’t have time to make you feel less socially awkward. You’d think that this lad would stick out like a sore thumb. And he did stick out. But more like a smooth, suave, elegant thumb. The way he approached other people was incredible. He effortlessly charmed and befriended woman and man alike. Heck, I felt good just by talking to him, as well. Meanwhile, social interactions that day were making me anxious. That wedding was particularly important to me because I know the groom very closely. I thought of it as a big day. I was worried about the impression I would make. But suddenly, I stopped myself. I sat on a bench outside and just listened, overhearing a conversation this lad started with two other individuals. I paid attention to his opening line, body language, and mannerisms. They seemed genuine, fluid, relaxed. “Salt. Water. Butter.” You get the idea. That night, I had the courage to apply the same things in my own interactions. And they went smooth as hell. I learned from him how to have fun and be tongue in cheek, despite the importance of the event. Thanks to him I reinforced my belief that I have to take small risks, put myself out there, and allow myself to “not care”. Because, that way, the event would turn out to be more enjoyable. I have forgotten many details from that experience. But some have stuck with me. I learned how to adjust the Salt. the Water. the Butter.

The second way of learning leads back to what my dad was doing — learning from his shortcomings(mistakes) in the kitchen. At this point, you probably already caught the metaphor. This doesn’t only apply to the kitchen. It stretches to all areas of life: relationships, hobbies, work, etc.

The best way to learn, in my opinion, is to do it yourself. Bash your head against the wall until you figure it out. It may not be the most efficient way to do it, but if you screw up yourself, you know where you went wrong and where to improve. Rather than learning vicariously, you do it first-hand. This takes curiosity, courage, and motivation. Curiosity to see where these experiments take you. Courage to assume the risk of changing things up. And motivation to overcome procrastination and do the change now. Not tomorrow. Now. Want to quit your day job to work on that side hustle full time? Make a budget plan now, call your boss and tell him you quit now. Want that awesome gal/handsome guy/quirky android in your life. Ask her/him/it out now. Want to face a big fear you have for your own benefit? Do it now! Try, try, try. You might fail all the time. But the point is, you gain valuable information on how the world (or your world) works. Next time, you’ll apply this information and be a tad better. Now you’ve learned. Salt. Water. Butter.

This essay may have sounded like something thousands of self-help motivational gurus would say. The thing is, I wrote this for myself. By doing so, I’m reinforcing this learning mindset in my brain. I hope that it’s something that will stick with me more in the coming decade. If you think these thoughts are useful, don’t just ponder on them. Do. Implement. If you think I’m full of nonsense, tear me apart in the comments. I can’t wait to debate.

NOTE: These settings will only apply to the browser and device you are currently using.